Magic is a mystical force featured ABC's Once Upon a Time. It first appears in the first episode of the first season.

Magic is a force that plays heavily in every season of Once Upon a Time, as well as Once Upon a Time in Wonderland. It is said to "always come with a price". Those who are unaware of its costs generally find themselves with unwanted results if they choose to use it. Notable practitioners include Rumplestiltskin, the Evil Queen, the Blue Fairy and Emma Swan.

–Hook to Elsa in "Family Business" 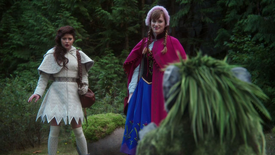 Refresh for another Family Tree!
Retrieved from "https://once-upon-the-once-upon-the-time.fandom.com/wiki/Once_Upon_the_Once_Upon_the_Time_Wiki?oldid=5003"
Community content is available under CC-BY-SA unless otherwise noted.